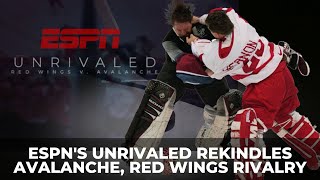 Editor’s Note: The following article represents the views of the author.

When it comes to rivalries, there was nothing like the Colorado Avalanche and Detroit Red Wings.

If you didn’t live it and experience it, the best way to describe what those on each side experienced is seething hatred.

To this day, the emotions still bubble to the surface when any of the members of those Wings teams make an unsuspecting appearance on a device.

But the hatred is real.

That’s how incredible this rivalry truly was.

All of this resurfaced with the release of the ESPN documentary, Unrivaled. It aired for the first time on Sunday. Quick note: I have yet to watch it since I was on edge about Game 6 of the Stanley Cup Final. Thankfully the Avs won in Tampa Bay, 2-1, later in the day to hoist their third Stanley Cup. This was also the first major championship for a Denver sports team since legal Colorado sports betting launched in May 2020.

Once the emotion of that settles, then I’ll revisit the fiercest rivalry in the history of sports.

Just the teaser video was enough to give me goosebumps, as well as rekindle my seething hatred for the Red Wings.

What made this rivalry so special wasn’t the fighting and goonish behavior, though. How convenient that Detroit fans forget the cheap shot on Adam Foote prior to the infamous Claude Lemieux board of Kris Draper, who is still crying about it.

Beyond that, it was just incredible hockey played by the era’s greatest players.

Or the coaches (Scotty Bowman still has a punchable face).

So not only was the emotion at its peak in this rivalry, the games always meant something. And you knew to expect instant classics where anything and everything was possible.

You knew whichever team won the series, would more than likely win the Cup.

It was an unreal experience that will never be matched …

… Unless it’s from these two teams.

Could this rivalry come back?

When the trailer got released, and as Paul Costanzo and I recorded the video at the top of the story, one question kept bouncing around in my head: Could this rivalry rekindle?

The emotion is still there.

After all of these years, it won’t go away.

We got a glimpse of that a few years ago for the Stadium Series at Coors Field. Yes, the legend’s game was the main attraction, but you could still feel the energy in the ballpark for the real game. It didn’t turn out in Colorado’s favor, but this rivalry is still alive.

All that’s missing is a good Detroit team.

No, the rivalry wouldn’t be the same since none of these players experienced the peak.

But they know the history of the game.

They know the fans still feel that emotion.

Wings captain Dylan Larkin grew up in Detroit as a Wings fan. He knows what this rivalry is about, despite being born about two months after the Lemiuex hit on Draper in 1996.

For all that was great about the Avs/Wings rivalry, they never played in a Stanley Cup Final.

Yes, both teams are now in separate conferences and only play twice a year.

But can you imagine Colorado vs Detroit in a Stanley Cup Final? No to mention the NHL betting interest in that series?

For the first time in 21 years, the Avs are Stanley Cup champs.

Now it’s time for the greatest rivalry in sports to get a new chapter.

Yzerman, get your stuff together and get a good Detroit team back on the ice.