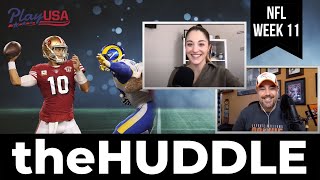 For the first time this season, fans get a break from the Denver Broncos.

Yes, there was the “mini” bye after the embarrassing loss to the Cleveland Browns, but this is a full reprieve. And it is much needed at this point in the season.

The Broncos are on the bye and there’s no way they can lose.

So with that in mind, here are five Week 11 games fans should keep an eye on for NFL betting and/or for just good football.

Rivalry games are always a roll of the dice. You never know what to expect.

That is especially true for these longtime rivals.

Aaron Rodgers and the Packers (8-2) are contenders for the No. 1 seed in the NFC.

Kirk Cousins and the Vikings (4-5) have some confidence after a big road win over the Los Angeles Chargers.

As it stands now, the Packers are slight a -point favorite.

The key to this game, for both teams, may come down to one statistic.

That could be a difficult task for Cousins and Minnesota given the Packers have one of the best defenses in the league. Green Bay enters the game with the No. 3 defense in the NFL.

As for the Packers offense, it has the potential to go off. Even with Aaron Jones potentially missing Sunday’s game with a knee injury.

This game will come down to one player, and it’s not Josh Allen.

It’s all about Colts (5-5) running back Jonathan Taylor. He’s currently tied with Derrick Henry as the NFL rushing leader at 937 yards.

When the Bills (6-3) faced Henry and the Tennessee Titans earlier this season, Henry had 20 carries for 143 yards rushing and three touchdowns. If Taylor does that this Sunday, Indy wins.

The other factor to consider in this game is Allen and which quarterback shows up.

If it’s the odds-on-favorite to win the NFL MVP, Buffalo has a great chance to not only win, but cover the current -point spread. If it’s the one who played against the Jacksonville Jaguars, the Bills will struggle in a major way.

Don’t expect a lot of defense in Sin City.

Both of these offenses have the potential to go up and down the field with big plays and score points.

As the adage goes, this game may come down to who has the ball last.

Cincinnati is a current -point favorite over the Raiders.

When the season started, this may have been a Super Bowl matchup for some. It still could happen.

Of all of the games this weekend, this has the potential to be a lot of fun.

As is the case with the Bengals and Raiders, don’t expect a lot of defense at Arrowhead Stadium.

Patrick Mahomes and the Chiefs (6-4) are the current -point favorite. If you’re looking for a possible underdog to bet on, this is it.

The Kansas City defense is atrocious and the Cowboys (7-2) offense led by Dak Prescott and Ezekiel Elliott should eat like it’s free plate night at Golden Corral.

Can the Dallas defense do just enough to slow down that Mahomes machine?

In terms of prop betting, this was my choice for theHuddle, the NFL betting show that Nicole Russo and I do. I went with Prescott over 2.5 touchdowns at DraftKings. At the time of recording, it was +145.

Again with the divisional games, but this is big for both teams.

The Cardinals need Kyler Murray. He’s obviously the player who flies that Cardinals (8-2) offense. With him on the field, they’re a completely different team and one that is tough to defend.

As for Russell Wilson and the Seahawks (3-6), they must win this game if they want a shot at the playoffs.

Arizona is only a -point favorite, so it’s an interesting line to be sure. When Murray’s status becomes clearer, that number will adjust. As of now, he’s yet again a game-time decision.