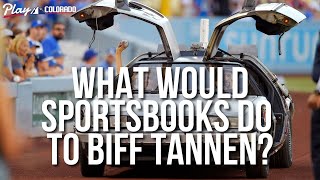 Anytime any “Back to the Future” is on, I stop what I’m doing and watch. I’m sure I’m not alone.

After all of these years, it always leads to two questions that spur debate in my mind:

Over the last year, a new question comes to mind:

“What would sportsbooks do to Biff Tannen?”

In “Back to the Future II,” Old Biff gets his hands on the sports almanac when Doc throws it away as young Jennifer is picked up by the police. Old Biff then steals the Delorean and travels back to 1955 to give the almanac to his younger self.

Young Biff then proceeds not to be a butthead, follows the simple advice of betting the winner and never loses.

What we don’t know from the movie is the betting strategy that Biff uses. Did he:

We also don’t know how or where Biff placed his bets.

There would have been limited ways for him to bet on sports at the time he was placing them in the 1950s through to 1985. He could either go to Las Vegas or use an illegal bookie.

Since Hill Valley was in California, it may have been easier to do it in Vegas. Perhaps I’m giving Biff more credit than he deserves, but he wants his winnings on the up-and-up.

Now, with the background in place, we can traverse back to the original question: What would sportsbooks do to Biff?

As Jay Kornegay, the executive vice president of operations at the SuperBook, told me:

“I think my first reaction would be to hire the guy. Or just be a friend. That would be quite the friend, because if he’s your friend, I wouldn’t have to punch in and out everyday.”

Though, as Johnny Avello points out, Biff would have no reason to work for a sportsbook.

Avello is the DraftKings Sportsbook director of operations:

“Why would he want to work and give you that information? If you had this kind of information that he had, you would not want to share that with anyone. You would want to keep that totally to yourself. The only other person you may share that with, maybe your wife, and you know that you two are going to be together forever because you don’t want her to ever tell anyone. Or a best friend who you know you can rely on. That’s a real, true best friend.

“Information like this, if you give it to anybody or anybody knew about it, it would get out. If I hired a guy like that to work for me, of course, my staff would know about it. Somebody would find out about it and it would spread around and that would be the end of it.”

In terms of what each would do to Biff if he placed wagers at their books, they both agreed.

“When somebody knows the results before we know it, that’s usually a cutoff. But, I wouldn’t do that. You know what I would do? I would not cut Biff off. What I would do is I would take Biff’s bet and then I would use that, and — this is unethical, of course, you wouldn’t want to actually do this — I would use that information for our business.”

Kornegay said he’d view Biff as a typical sharp bettor at the SuperBook:

“If I had to deal with a guy like that, it’s not that we would ban him from playing in the SuperBook, we would use his information to strengthen our lines for everyone else.”

Kornegay continued, “All of a sudden he laid the Broncos -3, and everyone is at 3 in the market, the SuperBook is now -3.5. We would certainly be very aggressive with his plays. But you wouldn’t want to let the guy go, you would want to use that information.

“That holds true today with some of the more respected players out there … we use that information to strengthen our lines. It doesn’t mean it’s going to be a guaranteed win, but we certainly respect a lot of players out there.”

As noted earlier, whether all this is sustainable for Biff depends on his betting strategy.

If he’s going full bore, just betting the winners with no losers sprinkled in, and throwing $100,000 on each game, Biff would have to make like a tree and get outta here. The sportsbooks would have to limit him or they wouldn’t survive.

If he was more strategic, say $2,000 on each game, Avello said he would not limit Biff. Actually, he would use those bets to his and DraftKings’ advantage:

“Make sure it looks like you’re good but you don’t have the answer. And don’t be betting enough to drain the house because they’ll cut you back. So there are two ways to do it: Bet just enough to stay under the radar and pick some losers. I think that would keep you going for a really long time.”

Kornegay took a more old-school Las Vegas approach to all this, especially if the various sportsbooks discovered Biff had that Grays Sports Almanac to place his bets.

Keep in mind, he was joking:

“I’m not sure what we could do outside of, and the tongue is firmly planted in the cheek, do we have to dig a hole in the desert or something? Of course, I’m saying that with a smile. I’m just joking. There are state black books, right? I don’t even know if we would be able to exist. If he had a community or group that he shares that information with, it would be almost impossible to identify each and every one of his acquaintances. So we would, obviously, have to limit them to a certain amount. But, again, use that information to our benefit. And that would be a juggling act.”

The key for Biff on all this is to not stick out.

Given Biff’s penchant for flamboyance, that might be hard for him to grasp.

“I think it would stick out as soon as someone saw me and him at a bar drinking beers,” Kornegay said. “Just like we do today, we monitor all of the plays and a player’s history. And we have a certain amount of respect for those types of players. We have players that are very, very good, let’s say, with pro-football first halves. And anytime those players play a first-half total, we move it very aggressively.

“But those same players might bet baseball, but they’re not as strong in baseball as they are in pro-football first-half totals. So we don’t move it as aggressively in baseball as we do with the football games. And I don’t want to sound corny, but it is kind of an art form how you juggle those types of players and how you use their patterns and results to put yourself or the book in the strongest possible position to win.”

There are also regulators to think about as well. Let’s say Biff placed his bets in Colorado now that online sports betting is legal.

The Colorado Division of Gaming joked that it may not be able to comment on what it would do if it learned of Biff’s betting and time-traveling shenanigans, but if it was discovered that Biff was using the almanac to place his wagers, he would get punished.

As Dan Hartman, director for the Division of Gaming, said:

“If someone knows the outcome of an event, like with match-fixing, and the division or the operator found out about it, the operator is well within their rights to void the bet and the division could cancel any bets to ensure the integrity of the system. Any people with knowledge that gives them an advantage should not be allowed to bet.”

Since we’re in the gambling space, the subject quickly pivoted to what Avello and Kornegay would do if they got their hands on the almanac.

Kornegay was more focused on his betting strategy:

“I gotta admit: This is something that we have joked about over the years, saying, ‘Could you imagine coming across that almanac?’ And you wouldn’t want to go full tilt, right? You would want to kinda gradually bet some of these things so you wouldn’t stick out like a sore thumb. ‘Oh my gosh, Kornegay is 98-0.’

“You would have to do something like, ‘Oh, you know, I’m 60 and 40.’ Because you wouldn’t want to get 86ed by every sportsbook, right? So you have to slowly bleed the sportsbooks to death. That would be my strategy.”

In his scenario, Avello is still running the DraftKings sportsbook:

“If I knew the other side was going to win, I wouldn’t want to put up a 1 on the other side; that would be a giveaway, wouldn’t it? So I’d have to put up something that’s maybe .5 point less, possibly a full point less, but that’s the only way to get away with it without people knowing that you know.”

From a betting perspective, Avello was strategic like Kornegay:

“I wouldn’t continuously pick winners every day. I’m going to pick more winners than losers, that’s for sure. And I’m going to make a good living out of it, but I’m not going to show you my hand.”

Sports bettors have obviously gone on winning streaks before. Avello and Kornegay have seen just about everything in this business, although nothing like Biff. Kornegay said:

“Oh absolutely. There are certain players that get a lot of respect from us. That means that we move it very aggressively when they play to their strengths. Sometimes it’s just a hot month, and we’re like, ‘He’s 27-4 this month. Incredible.’

“That’s pretty extreme, but we’ve seen hot streaks before. You have to identify if it’s a streak/lucky or is it a really skill-based player. There are a lot of factors, and I’m not going to give up the whole recipe. But there’s certain things we can identify as far as with luck being on his side, or is he just a really successful sports bettor.”

“I’ve seen guys go on good runs that last all of the bowl season. I remember a guy going on a run in a bowl season, winning a million dollars betting $40-$50,000 a game. So he had a great run over the college football bowl season. I’ve also had guys that have had two- or three-month runs in baseball. So, yeah, it happens. Is it sustainable forever? It is not. But it is sustainable for a select period of time.”

Almost 40 years later, “Back to the Future” still plays a significant role in our society.

It offers a fun escape that’s left us all wondering what we would do if we came across a Delorean with a flux capacitor or got our hands on the Grays Sports Almanac.

Now we also know what sportsbooks would do to Biff … if anything.

If you had the almanac, what would be your strategy?