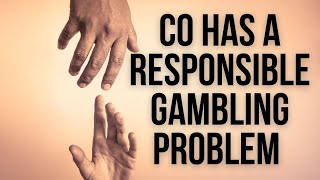 Keith Whyte wants the sports betting industry to feel a sense of urgency.

For all of the parties involved to realize that now is the time to have a discussion about problem gambling. As in, before it becomes a problem that costs money and does irreparable harm to peoples’ lives. All when it could have been prevented if people had just done more. If they just had the discussion.

“The more we talk about it, the more it normalizes gambling and gambling problems,” Whyte said. “We went through the same journey with alcohol 20, 30 years ago, where we started talking about it openly, both the benefits and the costs. We talked a lot about driving responsibly, trying to prevent drunk driving.

Whyte, the executive director for the National Council on Problem Gambling, isn’t looking to reinvent the wheel. He simply wants operators, regulators, industry experts, media, and bettors alike to take a serious issue seriously. That’s especially true when you consider students and student-athletes are at higher risk for problem gambling.

One of the best ways to start is with the partnerships between sportsbooks and universities. Colorado is at the forefront of this budding issue since the University of Colorado announced a deal with PointsBet last September. The five-year deal is worth $1.65 million and includes a tax write-off.

The deal also calls for Colorado to receive $30 for each person who signs up for sports betting after being referred by the school. The university will also help recruit students and alumni for internships and jobs at PointsBet. The former of those is what the NCPG is concerned about.

On top of the marketing and promotion across the campus and at athletic events at Folsom Field and the CU Events Center. Not everyone who attends those games is of the legal gambling age of 21.

While it’s too late to take this partnership back, both the university and the sportsbook have a chance to pave the way for how deals like this should work, especially when it comes to responsible gaming.

“There’s a great opportunity to have those same sorts of questions, that mainstreaming of this issue around college campuses, around deals like this,” Whyte said. “It does provide an opportunity to bring everybody to the table. It creates an opportunity to sort of help raise awareness, but at the same time, help educate students on if you’re going to gamble, how to do so responsibly. Because I know it never came up in my household, probably didn’t come up in your household. My parents gave me the talk about sex, drugs and rock and roll, and all that, but gambling never came up. And most kids we talk to haven’t thought about it that way.”

Despite the huge concerns that Whyte and the NCPG have on deals like this, bringing responsible gambling to light is a huge benefit. To make this a priority for a population of people who are at higher risk of problem gaming.

“So there are a lot of positives, raising awareness, normalization, getting rid of some of that stigma and just saying, ‘Gambling, if you’re of age, if you’re doing it for the right reasons, can be fun. If you’re being responsible about it, have at it. And here’s how to be responsible. Here’s how to do things like settling and stick to it,’ Whyte said. “And I will say, PointsBet, they’ve got very good, responsible gambling tools. So there is an opportunity. And I think really most of the responsibility lies with the institution.

Whyte has the numbers to back up his concern.

And they show why this is so important.

“There’s something about being competitive, highly competitive. About believing in your own skill and being able to play through pain or stress. There’s something about athletes that we think may make them less likely to participate but maybe more likely to have problems. And so there’s one line of argument that says, we need to pay attention to this because just on a basic level, college is a time of heightened risk for gambling and gambling problems.”

College deals with sportsbooks adds to the risk

That’s where the sponsorship promotion between CU and PointsBet becomes an issue.

As Whyte said, that endorsement of gambling on college sports is a subtle nod to a high-risk population. The Colorado Division of Gaming recently said the commercial partnerships provide positive benefits for the collegiate institutions that decide to work with a sports betting operator.

“At a main level, I think if you really break it down, our primary concern is that the student population, both athletes and non-athletes, is an elevated risk for gambling problems,” he said. “And that’s what makes these partnerships deserve some additional responsibility on the policy around it.”

One of the reasons students and student-athletes are at such a high risk of problem gambling is they don’t know about it. Hence why it’s so important to start having these discussions now.

“The catch-all is gambling literacy,” Whyte said. “We did a national survey of 28,000 people, including 500 people in Colorado.”

Numbers back up NGPC concern

This is where the numbers force you to pause and take a step back.

“Overall, we found that age is strongly correlated with gambling literacy, to the point that young adults are at the highest risk,” Whyte said. “We asked a series of problematic play indicators in this huge national survey and 19% of 18- to 24-year-olds, by far the highest of any age group, reported they answered many times to at least one indicator of problematic play.

“And those four questions are like, needing to gamble more and more to get that same feeling of excitement, relying on others to pay their debts or bills, lying to hide their gambling, or feeling restless or irritable when they try and quit or cut down. So 19% of people between the ages of 18 and 24 on this huge national survey, answered ‘yes’ to at least one of these questions many times.”

Council not diagnosing anyone

Whyte was quick to point out that doesn’t necessarily mean those students are problem gamblers. He was very clear about that. He added that he and the council are not diagnosing anyone.

What Whyte is saying is that risk is concentrated in this age group.

“So, it’s a dramatic skew that they have less gambling literacy and higher participation,” Whyte said. “And especially when it comes to sports betting. We asked sports bettors those same questions, sports bettors are roughly three times as likely to report problematic play. So it’s on two axises. You look at age, and risk is highly concentrated among age. And then you look at type of gambling and we’re comparing sports bettors to other gamblers, but just gamblers who don’t bet on sports.

What are the factors for the high risk?

But there’s also the promotion.

Think about gambling conversations on Twitter and the tweets about all of the people who hit on their 35-leg parlays or the major wagers. All people see is the people who hit, not who lost. Despite the fact a greater percentage do lose. As Whyte said, upwards of 90% or more.

That all correlates to why people think the way they do about sports betting.

In terms of numbers from a nationwide sports betting perspective from the council’s survey:

When you compare those numbers to other gamblers, you see how drastic the difference is.

Why do young sports bettors think this way?

That leads to the question, “Why do younger sports bettors think that way?”

Whyte said a big part of that is people have been sports betting at offshore accounts for years. As he said, it’s never been hard to go online and find an offshore book to place a wager.

He also added that gambling is part of our culture. He referenced when he was recently watching the classic comedy Animal House, and Flounder (played by Stephen Furst) goes into the Rush party and there’s a bunch of guys sitting around playing cards for money.

Whyte and the council aren’t naive about how gambling has always been present.

“Gamblers, in general, tend to remember their wins but forget their losses,” he said. “And so for some of these folks that answer, that think gambling is a good way to make money, they’re probably having that positive bias, that recency bias, that performance bias. They certainly know when they hit a crazy parlay or when these bets paid off. Which again, is part of human nature, that keeps us going. If we only remembered our losses and never our wins, you wouldn’t get out of bed in the morning.

“And we like to say, everything that makes you a good athlete or a good student may make you a risky gambler. Like persistence, especially if it’s a game of skill, you think study, knowing the game, knowing every blade of grass in the stadium means I’m going to be a better sports bettor because I can predict. And people can dive into those statistics. There’s always another level of detail.”

What can CU and PointsBet do?

Now that we know why people think the way they do, what can the industry do? To tie this back to universities and partnerships with sportsbooks, what can CU and PointsBet do? What should they do?

In the simplest of terms, the university needs to educate the student population.

“They could add gambling questions to some of those surveys and efforts,” Whyte said. “They could contribute so much to our understanding of this issue. And we might be wrong. Their students may be better educated. Their students may be at less risk. There might be things that we find out, maybe math majors are better at this than others. Is Greek life a factor? There’s been a fair amount of research of college to show that rates of gambling among males and females in sororities and fraternities are elevated. So maybe it’s not necessarily college so much as it is being in some of these other group experiences.”

Start having the responsible gaming discussion

The best place to start is by having the discussion.

If you want to avoid a bigger problem in the future, get in front of it while the industry still has the chance. Instead of reacting to a problem, aggressively work to prevent it.

Gambling is a game of chance, but problem gaming shouldn’t be.

“By having a public conversation about this, by engaging some of these recommendations and especially on the university’s part, by mainstreaming gambling and gambling addiction within their student life and wellness and health programs they could really, really do, not just their own folks, but nationwide, they could do us a huge favor.”