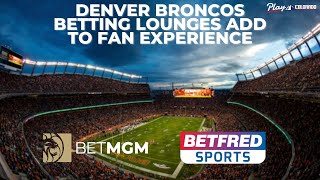 In fact, he never has even downloaded an app.

That is until he went to the Denver Broncos game against the Las Vegas Raiders on Oct. 17. On that beautiful October afternoon at Empower Field at Mile High — at least until the game started — the Nebraska resident stopped at the BetMGM In-Stadium Betting Lounge.

It was then that he finally took the leap and downloaded the BetMGM Colorado Sportsbook app.

“We don’t have legal sports betting in Nebraska, and I wish they did since it’s an exciting way to watch the game,” Streff said.

Streff added that he had heard of BetMGM before, and if Nebraska ever allows online sports betting in the future, he’ll sign up and download the app. Until that happens, at least he has Broncos games to attend and have some wagertainment. Nebraska legalized retail-only sports betting; however, all the racino-based sportsbooks are under construction.

Streff is a case study of why the franchise has three sports betting partnerships. The Broncos were the first NFL franchise to sign a deal with a sportsbook. As of now, Denver has three with FanDuel, Betfred Sports and BetMGM.

Included in the deals are two Broncos betting lounges from Betfred Sports and BetMGM. There is the Betfred Sports South Lawn Lounge and the BetMGM In-Stadium Lounge.

They are akin to sportsbooks without the kiosks, but since fans have kiosks in their hands via their phones that isn’t an issue. Under Colorado state law, betting kiosks aren’t allowed outside of the casinos and retail sportsbooks in Black Hawk, Central City and Cripple Creek. As of now, it’s unclear whether that law will change in the future. Since Colorado is a mobile betting state, there isn’t a need for kiosks at the two betting lounges.

The Betfred Sports lounge is a tent on the south side of the stadium.

The only requirement to get access to the lounge is you’re 21 years or older.

Tailgating without the hassle of tailgating Aside from that, you can hang out and watch the early NFL games. If you’ve never downloaded the Betfred Sports Colorado betting app, you can get free bets and free beer.

That was the promotion against the Raiders and will likely be what potential fans who want to bet on the Broncos will see the remainder of the home games. Betfred Sports ambassadors are spread throughout the lounge to help new bettors figure out the app or answer the questions. There are also picnic tables spread across the lounge to relax and get off your feet.

Yet even if you don’t bet, this is still a great setup. As the weather turns, the Betfred Sports Lounge has HVAC capability. That means you can warm up in a heated tent, drink some beer and watch some football before you head into the stadium. Inside the lounge, the bar is located to the north, so as soon as you enter the tent, it’s on your right. There are tables spread throughout the lounge, but there are no chairs.

The better way to think about the betting lounge: It’s the way to get the tailgating experience without the hassle of actually tailgating.

The South Lawn Lounge opens around 3 1/2 hours prior to Broncos home games.

Betfred Sports COO Bryan Bennett told PlayColorado that the sportsbook picked this location for the tent. After selecting the location, Betfred worked with the Broncos and its activation partner to get the tent altogether.

“We chose the tent location where we currently are because we felt like the tailgating aspect of it would be a lot more interesting. You’d have fans’ attention, as opposed to being inside the stadium and people trying to hustle to their seats and watch the game. We just didn’t feel like it would work as hard for us. We were hoping to launch it last year, but obviously COVID had other plans, so we were excited to be able to actually get it going for this season.” The BetMGM In-Stadium Lounge offers the same kind of atmosphere. Again, the only requirement is that you have to be at least 21 to enter, and you don’t need to have the app.

Located on the northeast side of the stadium in the Mile High Village, it’s the first thing you see on your left as soon as you enter the gate. It’s also going to turn into the place to be right before kickoff and at halftime. Fans typically start to pile into the lounge around 11:30 a.m. or noon on game day.

Similar to the Betfred lounge, there are numerous TVs to watch the NFL games while having a beer.

BetMGM brand ambassadors are on-site to help if you want to download the BetMGM app or have questions.

And, of course, there are promos.

For now, new bettors at BetMGM can bet $10 and win $200 if your team scores a touchdown.

If you’ve already used the BetMGM app, once you’re in the stadium, you get a $25 risk-free bet that you can use to wager on anything. Per NFL regulations, the Broncos can’t tell people what to bet. But you must be inside the stadium to place the risk-free bet.

Both sportsbooks plan to use Broncos alumni

The other fun aspect of the BetMGM lounge is it’s the only heated space on the concourse.

Both of the lounges also have plans to use Broncos alumni to help spark even more interest. For Betfred Sports, that will come in the form of Ring of Fame receiver Rod Smith. The Broncos also plan to have VIP experiences at both betting lounges on non-game days. As of those now, those are to TBD.

“I think we’re hitting our stride and know what offers work best,” Bennett said. “Now we’re getting everyone trained up so they can do some troubleshooting that might come about here and there. We’re pretty happy with it. Can’t wait for the rest of the season.

Study: Fans have favorable view of Broncos because of sports betting

The fact the Broncos have been at the forefront of sports betting in Colorado, and the US, speaks to the change throughout the country and industry. As noted earlier, Denver was the first franchise in the NFL to announce a sports betting deal with a sportsbook. Now it has three.

And it’s not just paying dividends to FanDuel, Betfred and BetMGM.

The Broncos partnered with Littleton-based Tigris Sponsorship and Marketing and Samford University in 2020 to study the impact of and fan reaction to the team’s three sports betting sponsorships. In addition to showing the Broncos’ impact on driving brand awareness for each of the new partners, the custom research study also found that fans responded positively to the Broncos’ new relationships.

Of those fans who typically attend at least four games a season, 44% are more favorable toward the Broncos because of the sports betting sponsorships with FanDuel, Betfred and BetMGM.

“We expect the legalized sports betting industry to continue evolving at a very rapid pace. The lounges enable Betfred and BetMGM to offer education and assistance to new and returning bettors alike on their latest products, offerings and technology. Empower Field at Mile High has incredible connectivity for mobile devices through robust WiFi and Verizon DAS systems that will put our partners in prime position to benefit from the industry movement toward increased in-game betting.”

The Broncos also have to follow sports betting procedures and rules established by the NFL.

For instance, there’s an NFL security betting officer at the stadium to oversee the transparency and integrity of how it all functions.

Still, the NFL realizes what a tremendous opportunity sports betting is for the Broncos and league-wide.

The Broncos told PlayColorado that it helps create high engagement on social media and leads to fans attending more games. That’s what led the NFL to accept the Broncos sports betting deals and the two betting lounges.

A portion of each sports betting sponsorship goes to support the NFL’s “responsible gambling, education and policy enforcement efforts.” The NFL coordinates those efforts and specific programming.

That’s in line with the recent announcement that the NFL is set to launch one of the largest responsible betting campaigns ever. The league will work with the National Council on Problem Gambling.

As Keith Whyte, the NGCP executive director, said to ESPN:

There is an emphasis on responsible gambling that should help ease some concerns and alleviate preconceived notions of sports betting. Given this is all still in the infancy of what sports betting and team deals will look like, this is just the beginning.

“I think it’s just going to get more prevalent,” Bennett said. “Obviously the NFL, for years, had a very arm’s-length relationship with sports betting and even fantasy and daily fantasy. They’ve seen the light and realized that it’s here to stay. Fans want it. It can be done in a responsible way, and it can be good for everyone.

“Every new market that opens up, you’re going to see teams doing deals. I think it’s going to be a bigger part of the game, just like … Basically the same way you do it in the U.K. You go to the stadiums, and you can make bets in the stadium. You have people come around to the in-stadium pubs before a soccer match, and you can actually do parlay cards. They’ll come to your table, and you can throw up parlay cards and make your bet that way. It’s a big part of the game.”

Sports betting, betting lounges will become a bigger part of the game

Bennett added that as long as bettors’ bet responsibly, sports betting and lounges could add to the fan environment and fan experience.

“I don’t see that changing,” he said. “It’s going to get more and more prevalent. I think obviously you’ll see that with the NBA and MLB as well. I think as more states legalize, you’re going to see it become a bigger and bigger part of the game.”

The same is true for the Broncos.

Just ask Streff, who had never bet or downloaded a sports betting app prior to experiencing the BetMGM In-Stadium Lounge against the Raiders.

“The Betfred Sports South Lawn Lounge and the BetMGM Lounge are great opportunities to enhance the overall fan game-day experience. They provide a comfortable environment for attendees to enjoy and interact with the Broncos in a new and exciting way.”