When folks mention rivals of the Denver Broncos, the Pittsburgh Steelers seldom make the list.

It doesn’t make sense when you consider the history of the Broncos.

The greatest moments in franchise history happened in part because of this rivalry.

When you think about the great games these two teams always seem to play, it’s confounding why the Steelers are rarely specified as a classic rival.

The last time these two teams smashed helmets in November 2018 in Denver, it was the latest miracle finish in favor of the Broncos.

Denver won on an interception in the end zone by defensive end Shelby Harris with less than one minute remaining.

Of course, you can’t mention “miracle finishes” and this rivalry without including the overtime win in the 2011 season spurred by Tim Tebow and Demaryius Thomas. It remains one of the most surreal moments and plays in Broncos’ history.

Eight years ago today, @TimTebow and @DemaryiusT stunned the Steelers with an 80-yard TD on the first play of OT 😯

Will Sunday’s game in Pittsburgh become the latest to add to the archive?

Based on what the top betting apps think, Drew Lock and Denver (0-1) don’t have a chance.

The consensus at Colorado sportsbooks is Pittsburgh (1-0) at -6.5, as of Sunday morning.

The rash of injuries for the Broncos is a huge reason why.

By now, you know about edge Von Miller and his foot injury that has him on injured reserve.

Cornerback A.J. Bouye is out for the next few weeks, as is running back Phillip Lindsay with turf toe.

Still, even a healthy Broncos team would struggle at Heinz Field, but when you include the injuries and who is injured, no wonder they’re heavy underdogs on Sunday.

For those looking to bet on the Broncos, if you do point spread betting and bet against the spread, that’s where you could come out on top. Despite the injuries, Denver still had a legitimate chance to beat a team in the Tennessee Titans that went to the AFC championship game last season. Some might say the Broncos should have defeated Tennessee.

Despite what the sportsbooks think, Sunday’s game will be closer.

Here’s a look at some of the best promos for NFL betting Week 2 of the regular season. 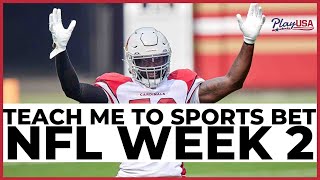 First-time depositors have another opportunity on this wild promo. To start, make your deposit of $5 or more.

Pick your game on the 100-1 landing page, and apply the boost in the bet slip to either team of the game you choose.

Place a bet of $5 or more on the Broncos at Steelers “First Touchdown Scorer” at SportsBetting.com. If your bet loses but the player you choose scores a touchdown anyway, the book will refund 100% of your bet up to $100 in free bet credits.

Place a pregame NFL moneyline wager on any Week 2 NFL game and receive double winnings if your team scores 35 or more points. The max bet is $50.

How the Broncos can win

For the Broncos to pull the upset and get their first win, they have to win the turnover battle.

That will give Lock and the offense more possessions. Denver then needs to turn those turnovers into touchdowns.

One of the key moments in Monday night’s opener was the Broncos’ inability to score from the one-yard line in the second quarter. If Denver is able to get a touchdown in that key moment, it probably wins.

Learn from that and be better on Sunday. Against quarterback Ben Roethlisberger and the Steelers offense, you can’t leave points off the board. That means the Broncos can’t kick field goals either.

The other key to this game is consistent pressure on Big Ben.

With the injury to Bouye, that will help take some of the pressure off the secondary. Of course, it’ll help if Denver can sort of cover the tight end. Maybe? But consistent pressure on Roethlisberger is huge. That doesn’t just mean sacks by the Broncos, but get in his face, rush him and hit him. If Denver is able to do that, it’s also a sign it will contain the Steelers’ running game.

Based on the odds and injuries, it doesn’t appear the Broncos have a chance on Sunday.

But with rivalry games, you never know what to expect. As the saying goes, you can throw the records out of the window. After Monday’s tough loss, most in the Colorado sports betting market would hope Denver could do that.

When rivals of the Broncos are listed, the Steelers aren’t mentioned.

Yet when these two teams meet, magic tends to happen … and usually in Denver’s favor.