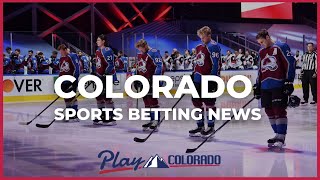 Despite the obstacles and uncertainty, the Colorado sports betting market still has mile-high expectations.

As noted in the PlayUSA video at the top of the story, the last four months have no doubt been historic and crazy, but the wide world of sports is finally offering a reprieve again. The distraction that sports are back, just in unique fashion.

Fans may not be in attendance, but at least having it back on TV is more than enough.

In the Centennial State, online betting apps can enhance the entertainment. Now you can watch and partake in live betting in Colorado at the same time.

And you don’t have to place wagers on Russian table tennis; though, according to BetRivers, Coloradans are still doing so. The sport was still in the sportsbook’s top 10 for sports and leagues by wager last weekend.

Apparently, Colorado sports fans do have an affinity for the sport made famous by Forrest Gump.

Nevertheless, the return of major US sports and the launch of more sportsbooks in CO has excitement and expectations a mile high. The documentary, “Let’s Play: The Story of Colorado Sports Betting,” touches on how we got here.

The first two months of sports betting gives a sense of why people are excited about the possibilities.

When you factor in the absence of MLB, the NBA and NHL until the end of July, those are really good months. For May in particular, Colorado only had six sportsbooks live, and just four for most of the month.

Now the Colorado Avalanche remain a serious contender for the Stanley Cup; especially after their defeat of the Arizona Coyotes in the Stanley Cup Playoffs.

The Denver Nuggets are already in a battle with the Utah Jazz in the NBA playoffs.

The Colorado Rockies have dipped somewhat after their fast start, but remain in the No. 2 spot in the NL West (that would get them in the playoffs this season).

And, of course, the king of Colorado and the Rocky Mountain region, the Denver Broncos, will soon return to action. Drew Lock and the Broncos are back on the field for training camp with the expectation and hope they get back to the NFL playoffs.

“I think it’s been stronger than I anticipated. The market’s been really good. And it’s just going to do better. There’s passionate fans. One thing I do notice about those passionate fans — they definitely like to bet on their home teams for futures. The Broncos have been bet quite heavily there. The Avalanche have been quite heavily there. The Rockies, the same. So, they’re passionate about their sports, and it shows in their future wagering.”

As it stands now, there are 11 sports betting apps and five retail sportsbooks in Colorado.

That number should continue to grow as we get closer to the start of the Broncos and NFL season.

As noted in the video, look for the SuperBook to be one of the next sportsbooks to launch in Colorado.

It was announced in April that SuperBook would pair up with The Lodge Casino in Black Hawk to provide both an online and on-site sportsbook option to prospective bettors. Although as the start of the Broncos season inches closer, keep an eye out for Betfred, theScore, PlayUp and PointsBet to launch soon.

The launch of sports betting in Colorado has been quite the ride, and it’s only been four months.

But the return of major US sports still has expectations a mile high.